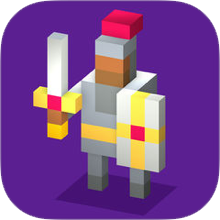 I know you saw the In-App Purchases above, but don’t worry. Looty Dungeon is not one of those games that claims to be free, when in reality to do anything worthwhile you have to spend ten bucks “unlocking” something via an In-App Purchase. Looty Dungeon’s IAP is simply characters you may want to buy, although I think you can actually earn them all just by playing the game and earning the in-game currency.

Looty Dungeon takes its visual cue from the 8-bit retro craze that seems to be infecting the App store the last few years. (I think Minecraft is to blame, but I don’t know for sure.) Many games that use 8-bit retro graphics are not much to play, and the look and feel is really the only draw. Not so with Looty Dungeon. This is a fun, pick up and play game that will probably have you coming back time after time to get some more in-game coins so that you can buy another character.

Unlike a game such a Crossy Road, where the characters may all look different, but they really don’t DO anything different, in Looty Dungeon the new characters actually have different abilities and health levels. You start off with a standard knight, who can both block and attack. As you collect more cons, by either picking them up in each room, completing tasks, or watching some advertising video, you can then begin to “buy” or unlock different characters. These characters, such as the Mage, can do different things. In the case of the Mage, he tosses out goo (a spell?) that will kill the bad guys. Some have weapons that go farther. Some shoot arrows. There is a lot of variety here.

Looty Dungeon starts you off in one room, and you simply tap the screen to move forward. You swipe left, right, and back to move in those directions. Each room has a square, and you move from one square to the next. Each room also has some sort of peril that you have to overcome to open the door to the next room. (Thus there is no beating the game, you just go as long as you can before you die and start over) In one room, you may have to kill a bat, or a monster. In others, you have to beat a big boss, which may take up to three hits to defeat.

Attacking a bad buy is simply moving towards it with whatever weapon of choice your character is using. (Spear, sword, trap, etc.) As long as you attack first, you will usually kill the bad guy in one shot. However, some characters that don’t have a lot of power may require you to hit it twice. Or, in one instance I found, I could not damage a boss, and the only way to win that level was to lure him over floor spikes three times. If you attack and hit the bad guy, and it don’t die, move and hit it again!

Did I mention the floor spikes? They are not hidden, but if you are standing on a square when they pop up, it will take a heart away from you. Your character only has two or three hearts, so if you get hit by a bad guy, or a floor spike, or some of the other peril in the room, you will die.

The floor at the bottom of the screen also starts to fall away, forcing you to continuously move forward in the game. Stay in one spot too long, the floor drops away, and you’re dead.

Looty Dungeon may sound a little complicated from this review, but the truth is it is not. It is easy to pick up, takes a short amount of time to master, and brings you back for more time after time to unlock new characters or get further in the dungeon that on your last play. It’s a lot of fun, and I think I enjoy it as much as my eight year old son does.

While I have had a glitch-free experience with Looty Dungeon on both my iPhone 6 Plus and a couple different iPads, a few users have reported a few bugs. But in the two weeks since this game was released, there has already been two updates, so developer Taco Illuminati seems committed to keeping the game up to date.

And fun. Did I mention it’s fun?