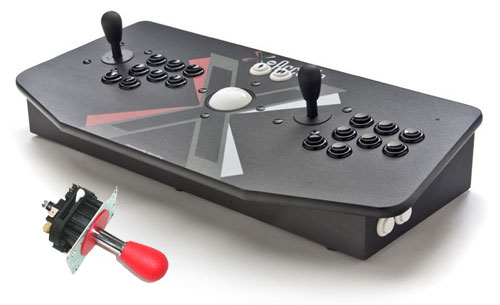 Now that I have two arcade machines, one of the things I had been wanting to address was the controls on the MAME cabinet. It came with the X-Arcade Tank Stick, which on first glance and a casual play seems like a good deal. The more you play with it, however, the more you will realize that the buttons and joysticks are pretty crappy. The roller ball may be as well, but I don’t remember using it save one time.

The first step into upgrading the controls was to do a little research. For this, I googled and asked a couple Facebook arcade groups, and the one joystick that kept being mentioned as being very good was the Mag-Stik Plus.

The Mag-Stik Plus has a very short throw, meaning you don’t have to push in any direction before the actuators are pushed. There is also no center spring, which is usually used to self-center a joystick after pushing it in one direction or the other. In the Mag-Stik Plus’s case, there is an internal magnet that handles that. And last, you can switch from 4-way to 8-way very easily. More on that later, because it is very important.

Ultimac.com is where I purchased the Mag-Stik Plus. It cost $38, which is more expensive than many joysticks, but seeing as how often I play on the MAME cabinet, I justified the purchase. The Mag-Stik Plus comes with the joystick topper similar to the X-Arcade, but what I really wanted was a ball-top joystick, like you would find on PacMan, Ms. PacMan, BurgerTime, and many other games. There is no competitive advantage to a ball top joystick, but a personal preference. So in addition to the Mag-Stik Plus, I also picked up a Ball-Top handle for the Mag-Stik Plus, which was an additional $14. So I’m all in for $52.

The next step, once the Mag-Stik Plus arrived, was to check out how far off the mounting was from the stock X-Arcade joystick. Turns out, quite a lot. 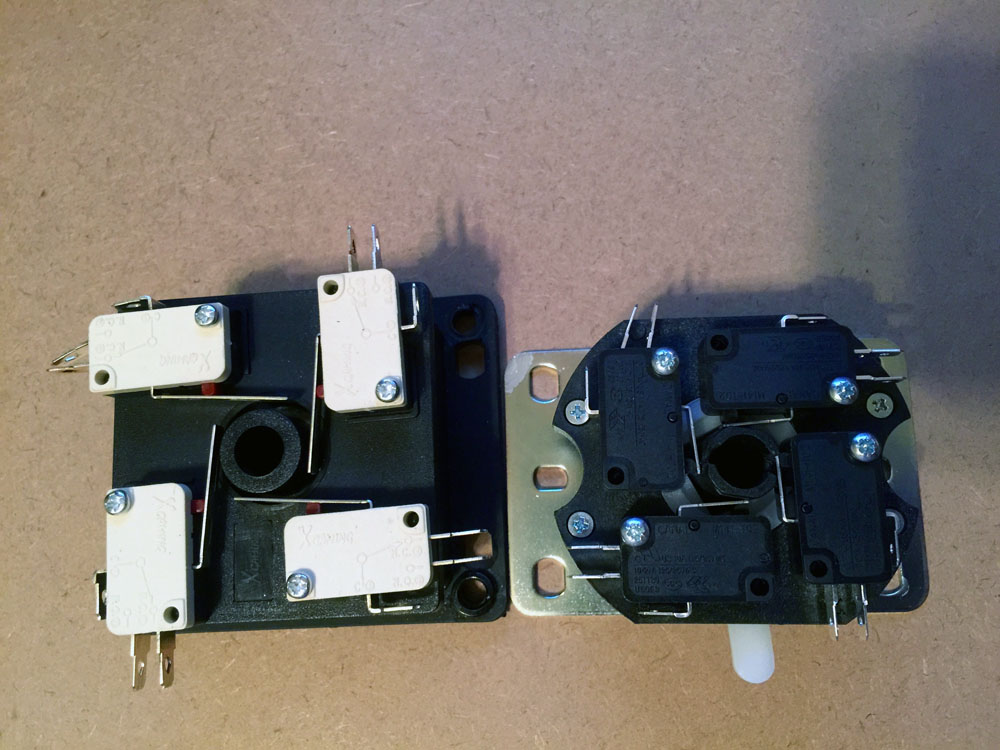 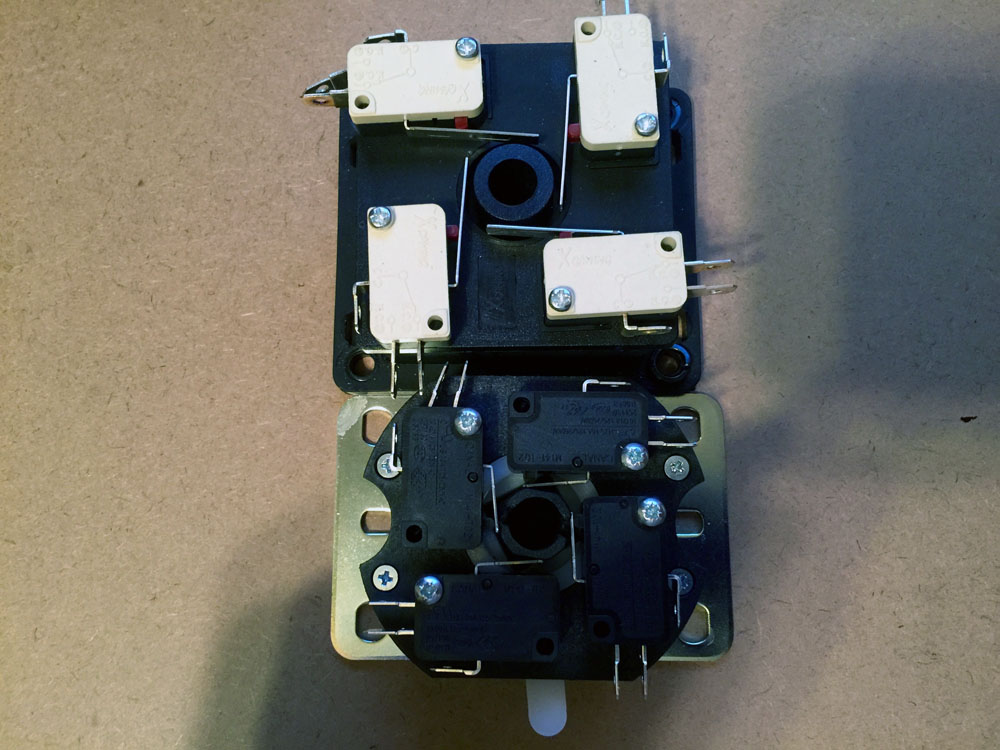 The X-Arcade, which for the uninformed, looks like a good start for those wanting to get into a console. It has everything most people want: plenty of buttons, a roller ball, side buttons for pinball, and it looks nice. The reality is that these things are built using really crummy joysticks, and the wood is really not all that great. Still and all, until I am ready to build a new control panel, upgrading the X-Arcade is my real only choice if I want better game play. 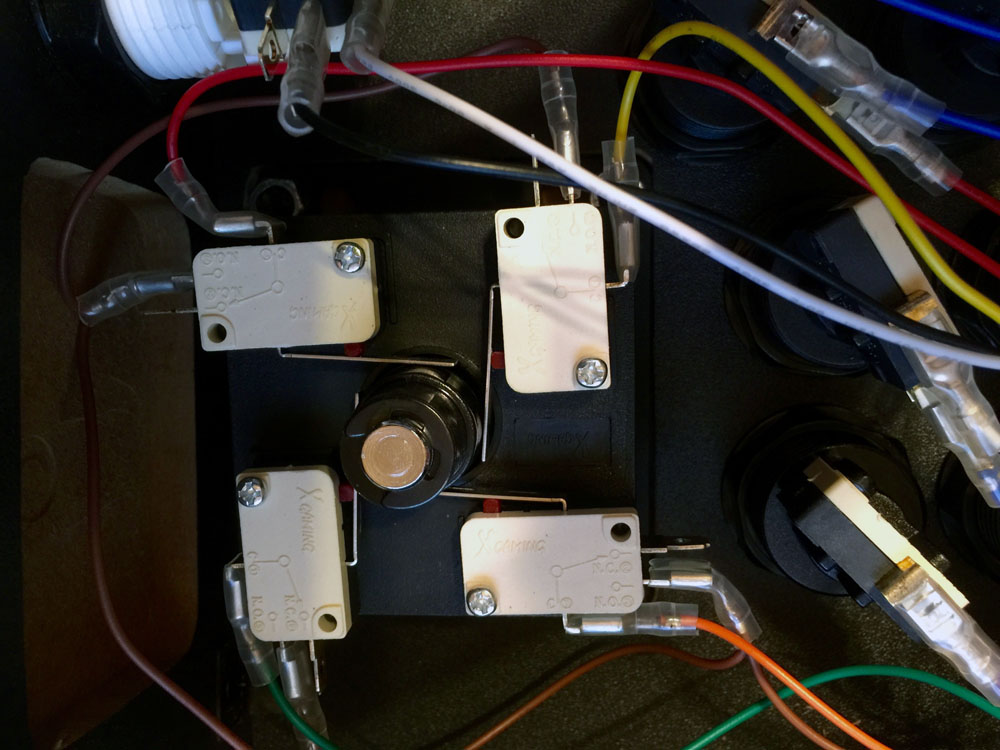 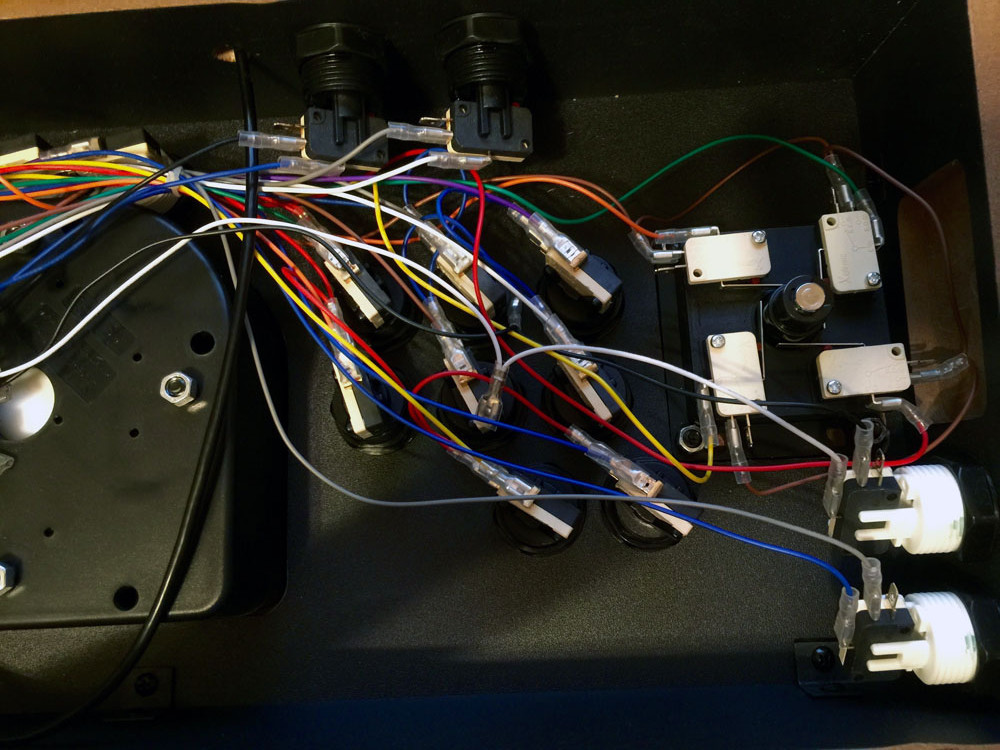 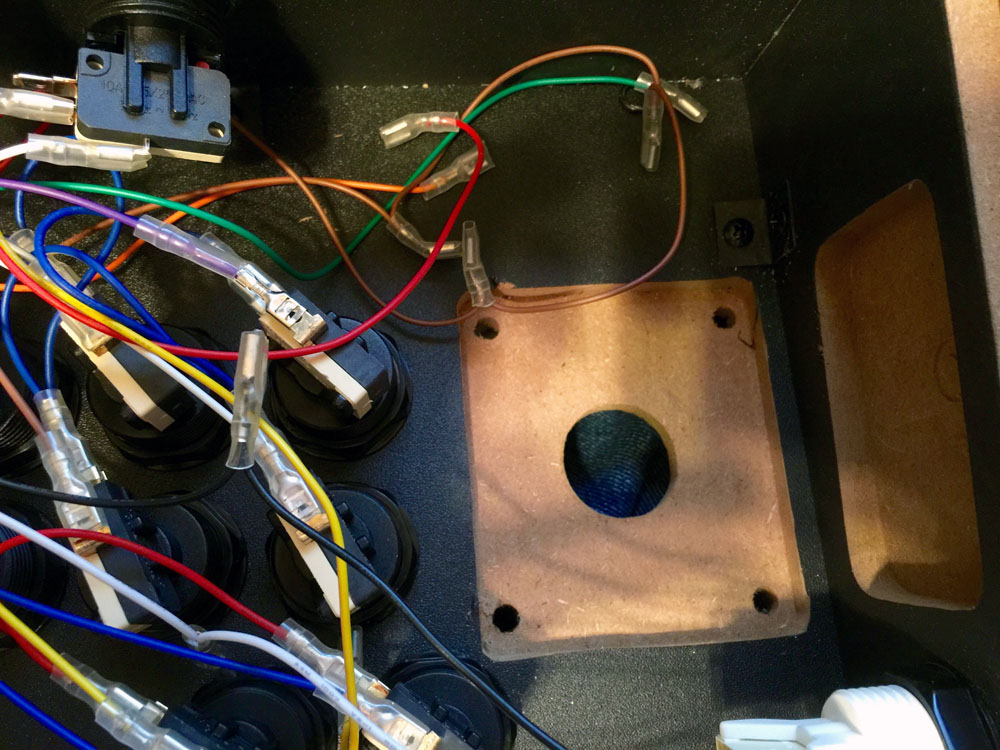 One I removed all the wires and nuts / bolts from the stock X-Arcade stick, I needed to see how far off the mounting was. As I said, pretty far off. So much so, in fact, that I would need to cut some of the inside of the X-Arcade panel to be able to mount the Mag-Stik Plus in. And even then, there was no way to reuse the stock mounting holes for the Mag-Stik Plus. Did I really want to drill into the X-Arcade and have expose holes? 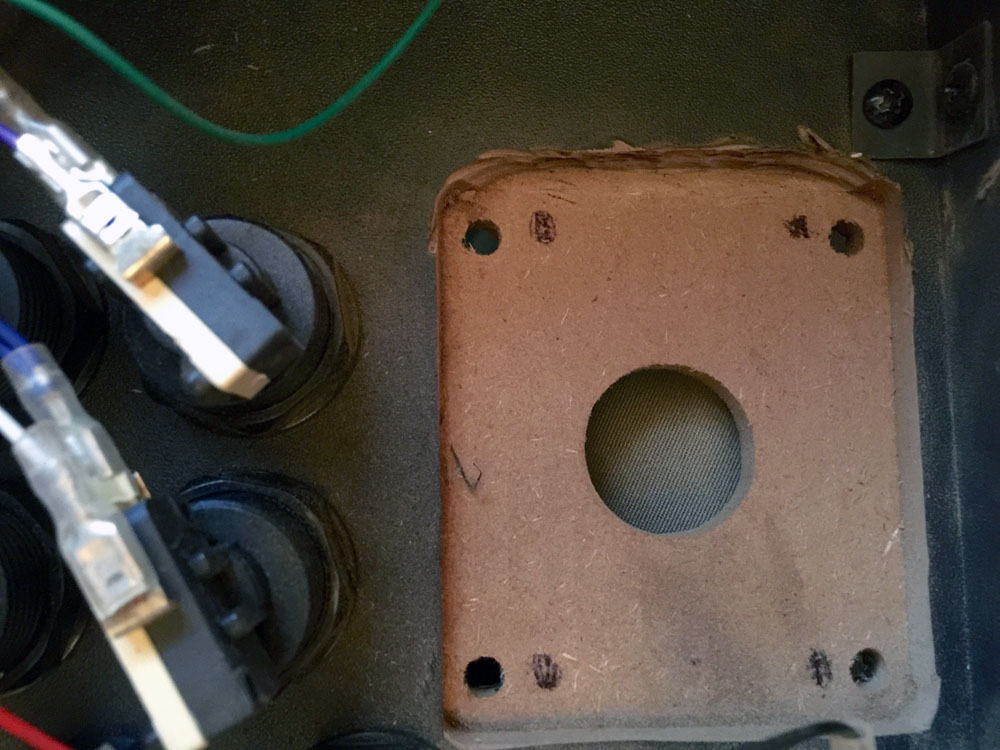 After I used my Dremel tool to widen the mounting area (by an inch or so), I put the Mag-Stik Plus in the new spot and marked where I needed to drill the new mounting holes. Because the X-Arcade is so cheaply built, the Dremel cut through it like it was made out of paper pulp, which may be the case for all I know. Likewise, drilling the new holes was super quick and easy. 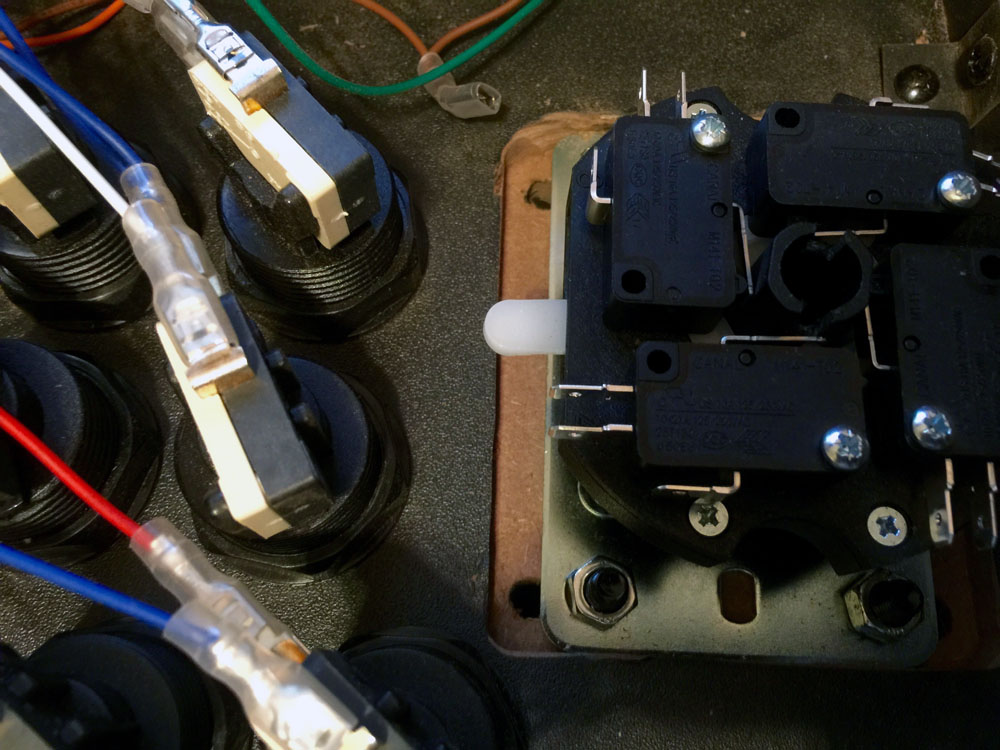 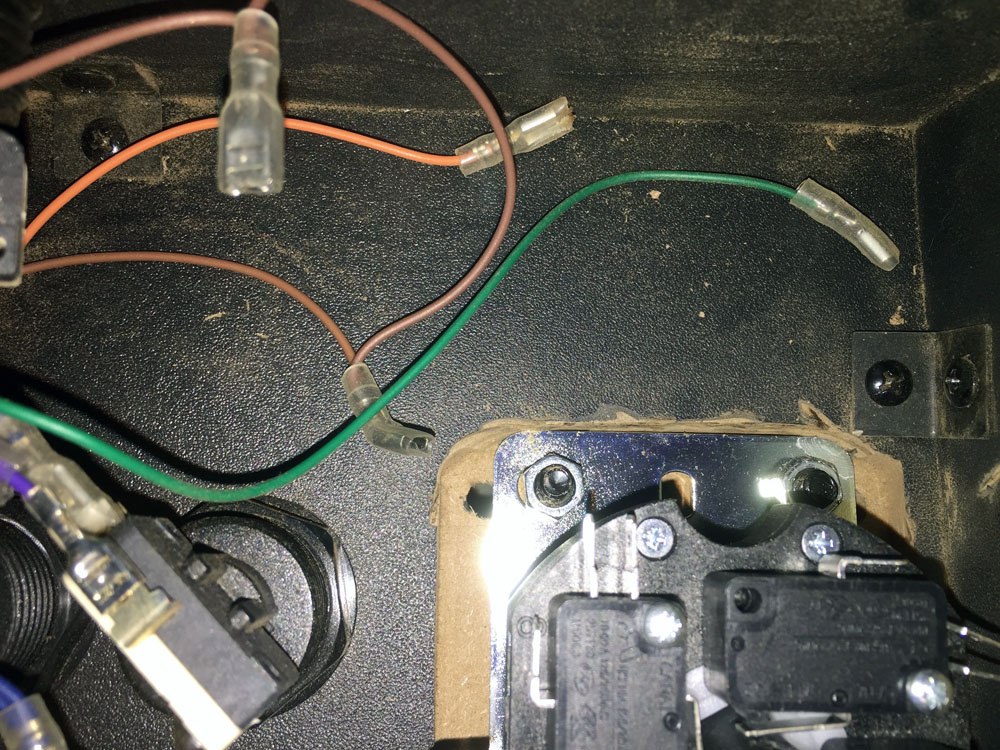 Turning the X-Arcade over, I could see my handiwork didn’t leave it looking great, but if my gameplay was markedly better, I would live with it until I eventually build a custom control panel. 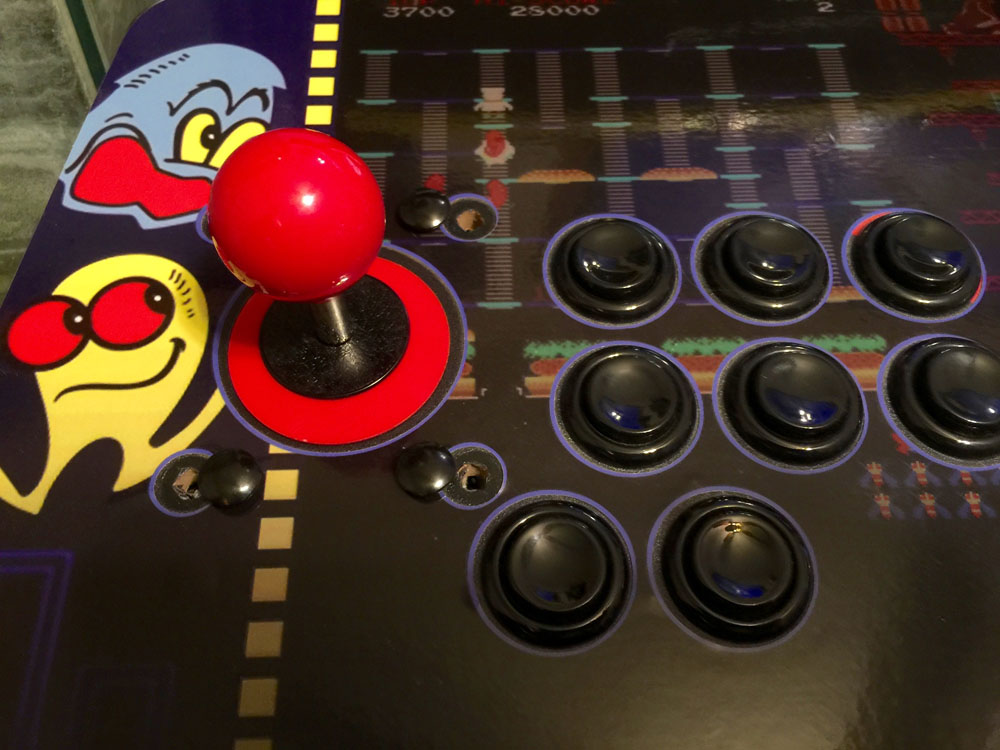 As mentioned above, the Mag-Stik Plus will let you switch between 4-way and 8-way. To do so, you pull up on the joystick, rotate it until the mechanism catches, and turn it either left or right, depending on which mode you want the joystick in. Why would you want a 4-way instead of an 8-way joystick? Well, many older games, such as PacMan, uses a 4-way joystick. On a 4-way, you can either go up, down, left, or right. Pushing the joystick in either of those directions will activate the actuator. What happens when you use an 8-way is that you can push both right and up, or down and left, or right and down, etc. to five you diagonal direction. Many games use 8-way control. So if you only have a 4-way joystick, you are limiting your gameplay in those games. Likewise, if you are playing a game that uses a 4-way joystick, and you are using an 8-way, the game will become confused if the joystick is pushing both the up and left actuators at the same time. At that point, the game will either guess which direction you mean and go that way, or it will not turn at all, ignoring the input for a split second all together. So either way, you want the correct joystick for your games.

There are many joysticks that allow you to switch between four and eight player control, but most make you get underneath the joystick and move a plate that controls it. Sometimes this involves screws and a screwdriver. But with the Mag-Stik Plus, that’s not necessary.

So how does the Mag-Stik Plus work in the X-Arcade? In a word: fantastic. The Mag-Stik Plus is leagues better than the stock, crappy, mushy joysticks that ship with the X-Arcade. The difference is immediately apparent. I’m also very glad i went with the ball stick, as it is much more comfortable for me to use.

The problem now: do I now replace the other X-Arcade joystick, or just want until I build an entirely new control panel? The second joystick gets very little use, and then usually in Robotron, or when one of the kids want to play a game with me. But I do want them to have the best gaming experience, but at this point I think it may be better just to wait. But it is tempting.

My next project is to replace the buttons on my NeoGeo! Come back in a few days!